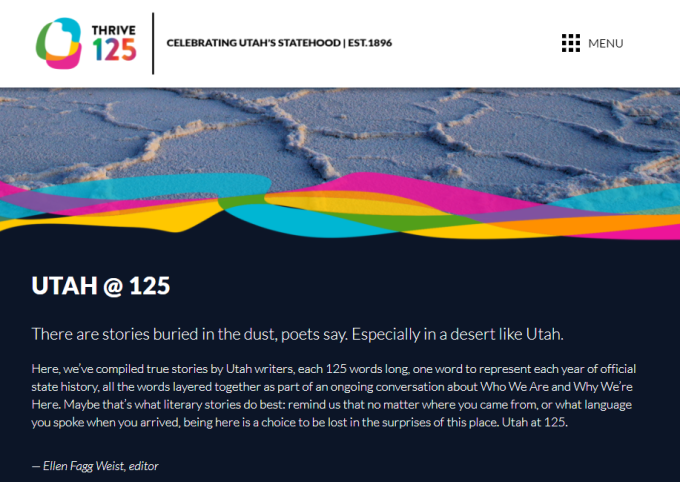 What: Utah @ 125, a collection of new 125-word nonfiction pieces by Utah writers

Other writers include slam poets, playwrights, nature writers, activists and novelists, based in Vernal, Cedar City, Provo, West Valley City, Eagle Mountain, Logan and Salt Lake City. These short-short essays describe a Bonneville Trail hike on the winter solstice, the anchoring feeling of watching quails march across a front yard, extraordinary views from on top and inside the artworks of “Spiral Jetty” and “Sun Tunnels,” and what it means to grow up in a town like Beaver.

The Utah Department of Heritage & Arts published Utah @ 125, a new digital literary chapbook, as part of Thrive125. The ambitious statehood celebration, which was launched Jan. 4 with a TV broadcast hosted by Utah Gov. Spencer Cox and Lt. Gov. Deidre Henderson and featuring Utah performing artists, will continue throughout the year.

Along with the literary chapbook, the Thrive125 initiative includes: a database of Utah’s 1896 architecture; “Becoming Utah: A Peoples’ Journey,” a short educational film with curriculum resources about Utah’s history; a One Book, One Utah state library book club highlighting Craig Child’s “Virga & Bone”; a “Voices: Discord and Harmony in 1896” digital exhibit; plus historical and cultural panels, such as “Wintertime Native American Tales”; and “Coming Together: How Utah Became the Union’s 45th Star,” an exhibition at the Utah State Capitol. 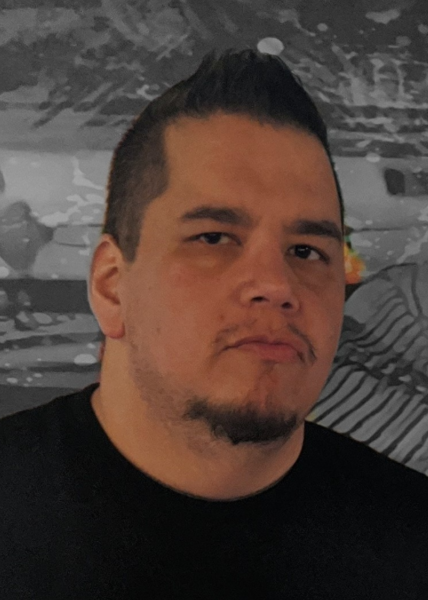 Join Yapaituka Comanche/Southern Arapaho poet, Sy Hoahwah, for a reading and discussion of his new poetry collection, Ancestral Demons of a Grieving Bride.

This free, virtual event will take place on Crowdcast and you must register here to participate. Buy your copy of Ancestral Demons of a Grieving Bride from The King’s English Bookshop and receive an autographed bookplate, while supplies last. We can only ship within the US.

Fractured storytelling for a fractured world, Ancestral Demon of a Grieving Bride draws readers into a world that appears eerily familiar but unsettling as well. Fierce, visceral, sometimes funny, and wholly original, Hoahwah’s poems will linger in a reader’s dreams long after she’s closed the book.

Each day during the month of April, Utah Poetry Festival is looking to promote a Utah poet to celebrate both the Festival and National Poetry Month.

For details on requirements, subject matter, tips for recording, and where to send your video, read more here: Read for the Fest.

The Utah Poetry Festival Will Be Online April 16-18, 2021 and registration is open now.

Due to the COVID-19 pandemic, the 2021 Utah Poetry Festival will be virtual. Beginning Friday, April 16 and ending Sunday, April 18, 2021, the festival will feature poetry pedagogy roundtables, moderated conversations and public Q&A’s with poets from around the state, and two headline reading events.

The Utah Poetry Festival is hosted by Utah’s poet laureate, Paisley Rekdal, and is funded by fellowships and grants from The Academy of American Poets, Utah Division of Arts and Museums, and Utah Humanities.

The Utah Poetry Festival is free and open to the public. Events can be watched live or streamed later via the Utah Humanities YouTube channel. Live events will feature public Q&As. All events will be closed captioned by AI Media. Only registered participants will receive a link to the Google Drive file with documents from the Saturday pedagogy panels. Registration is currently open. View the schedule to register. Festival attendees must register for each event they wish to attend.