Tremendous thanks to Joel Long for his incredible literary citizenship! He has been running the City Art series in Salt Lake City for many years and has been wonderful support of the Utah Arts Fest literary program among others. We were honored to have him feature for the Rock Canyon Poets reading series last year, and if you missed that, here’s his poem “Map to Taylor Creek” read just for us!

You can also watch him perform his Bite Size poem “Fate of the Animals” from 2009. 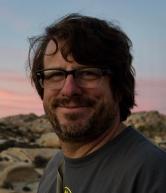